The Power of the Press is an exhibit on of prints and collaborative media at the Chandler Center for the Arts. The artist reception is Friday 9/26 at 7:00 pm so if you are in the area, stop by and say hello. 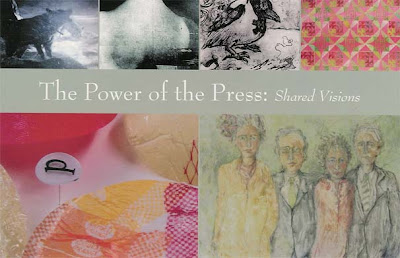 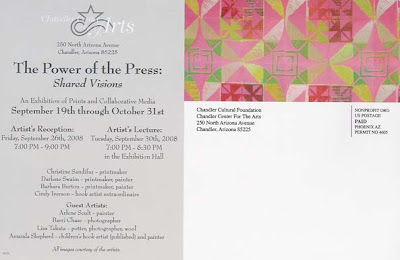 A few months ago Lisa Takata and I set off on a creative adventure at The Paper Studio to use the Power of the Press in every imaginable dimension. We collected piles of colorful recyclable materials including bubble wrap, candy wrappers, mesh vegetable bags, plastic shopping bags, used sewing patterns, tissue paper and overhead transparencies. Using a heat press, we morphed the structure, texture and form of these materials by melting them together at high temperatures to create translucent, multi-layered surfaces for printmaking. We letterpress printed everything--from the tissue patterns to the melted plastic all of which were hand-cut or die-cut into a series of repeating forms. Each component piece was hand printed, varnished, pressed, melted, folded, ironed, and heat pressed numerous times. Although the resulting work incorporates familiar shapes, colors and text, the ingredients we started with are hardly recognizable. Here's some quick pics of the collaborative pieces--Swarm Pattern and Daily Candy. Also, Lisa and I each did two pieces in response to this work. I'll post them and more details later! 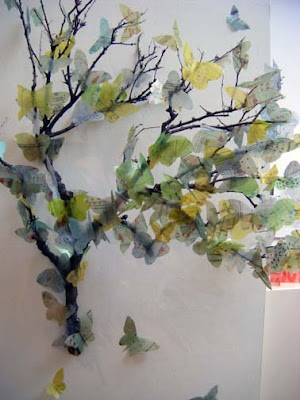 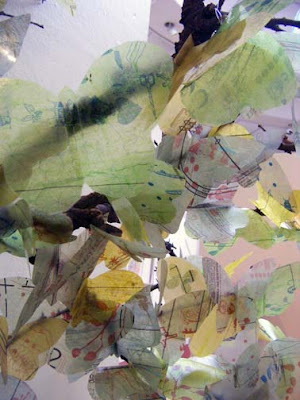 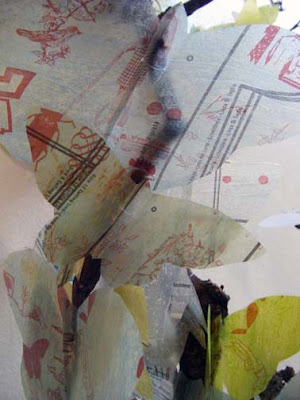 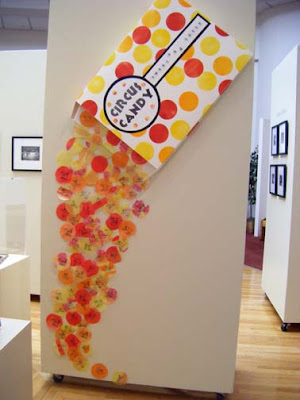 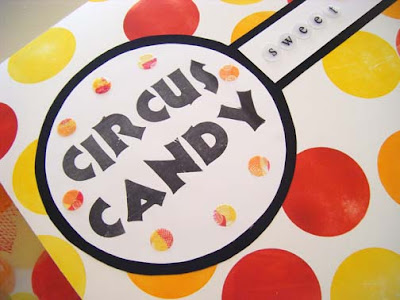 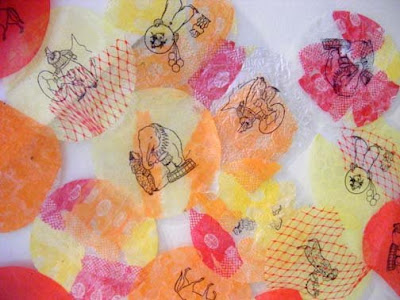 The Paper Studio in the September Issue of The Artist's Magazine

Okay, now back to art making!
We were thrilled to learn from one of our fellow artists - Danelle, that The Paper Studio is in the September 2008 issue of The Artist's Magazine. The Paper Studio was one of four artists/art spaces interviewed several months ago by Betsey Dillard Stroud about printmaking without a press. We are the "stomp" part of the article where you step on the inked up plate to make the print. When Danelle gave us her copy of the issue, we were tickled pink that several images of our samples were featured in the article! 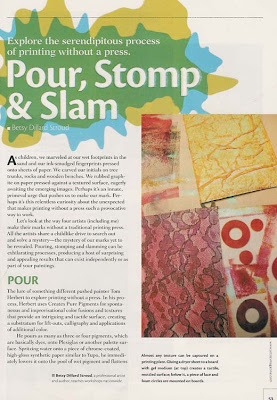 The image on the front of the article are plates I made with lace and a dryer sheet--mostly for background texture.

The images featured below show a sampling of simple plates and prints. 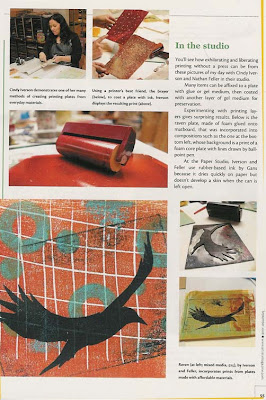 They even posted an online article with one of samples of "hammer printing" where you can make simple nature prints with out using ink and just a few bangs with a hammer. You can see this online technique at: http://www.artistsnetwork.com/article/hammer-prints

While we wouldn't trade our letterpresses for the world, inking up everyday objects and stepping on them has lots of potential! You'll see more examples of printing without a press when I get a chance to post the work that Lisa T and I just finished for the Chandler Center for the Arts "Power of the Press" exhibition. We used every press we could think of from letterpress, to heat press to printing without a press!

Along came a spider or a solifugea

20 years in AZ, I have never seen anything like this so I just had to show you the latest creature we found... 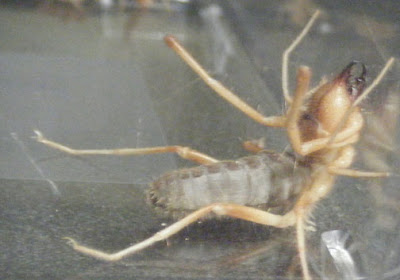 We live next to desert wash which is a great place to find dead fibery plants papermaking. However, living in the desert can involve interesting creatures occasionally wandering into our house. Gary called me over and asked me what kind of bug I thought this was. I counted the legs (8) and decided it was a spider. It looked rather dead so I told him to put it in a jar so I could get better look at it. He slid a card under it and then I saw a leg move....EEK! 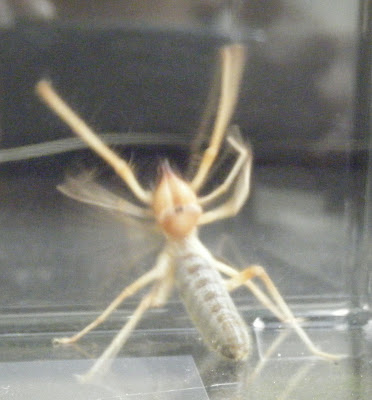 After it was in the jar it started moving around like crazy! (thus the blurry photo) But yikes, I thought...it could have jumped on Gary's hand.

This creature has the same coloring as a scorpion so I looked it up online. Per wikipedia, this is a camel spider or wind scorpion. Solifugae is an order of Arachnida, containing more than 1,000 described species in about 140 genera. The name derives from Latin, and means those that flee from the sun. The order is also known by the names Solpugida, Solpugides, Solpugae, Galeodea and Mycetophorae. Solifugae are not true spiders, which are from a different order, Araneae. Like scorpions and harvestmen, they belong to a distinct arachnid order. 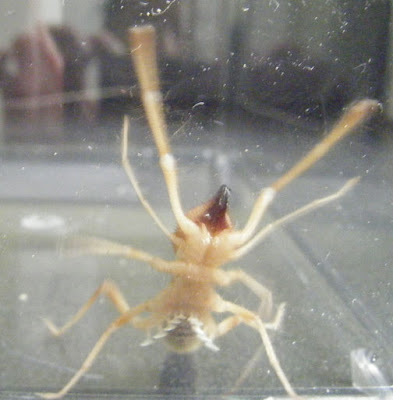 Notice the suction cups under its body--helps him climb! It is a really interesting creature and it eats a lot of annoying things like termites and scorpions. 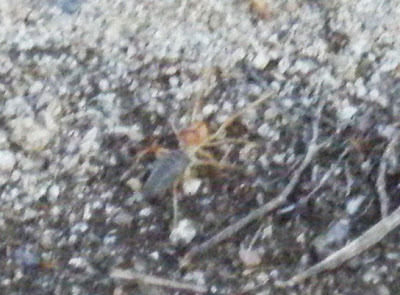 I released it in the desert wash--back to the wild (albeit--much farther away from our house). I read that they actually avoid the sun and that seemed to be true because it traversed over lots of rocks and sticks for quite a ways before heading into a shady thicket of brush and disappearing.
Posted by The Paper Studio at 9:08 PM